Rowan and Izzy are back in Kissed by Dragon Fire! A short story in Rise of the Phoenix! This adventure takes the two to a Con where dragons, fay, and were are real! 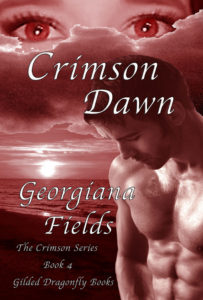 It has taken me a year to write, only because life happens. I’ve finished the rough draft and my cover artist, Gina Dyer has created the cover. Now comes the hard part, editing.

Crimson Dawn is the fourth in my Crimson Series. It is Royce and Jenny’s story. You will meet new characters while catching up with old favorites.

Like Royce, Jenny is Dhampir. She has had a crush on Royce since she was ten years old. When Jenny was thirteen, she accidentally walked in on him, catching him with another woman and breaking her tender heart. Now in her late twenties, Jenny’s crush hasn’t waned, but she knows she doesn’t stand a chance with the future Lord of the Dhampir. She may be a Healer, and she may be well loved by many in the Lucard Clan, but let’s face it! She a freak! Yes, she’s Dhampir, but Jenny is also fangless. And if being a fangless-freak isn’t bad enough, she’s also the daughter of Fagan Dorjan and the granddaughter of Zeno Dorjan. The sworn enemies of the Lucard Clan.

When a rescue mission goes awry, Jenny uses her special gift to help speed Royce’s healing. Her actions put her in the crosshairs of her biological family.

Because of events that occurred in the first three books, it is advised to read them before Crimson Dawn.

Here is a little taste of Crimson Dawn:

“We’ve got visual on the prize. She’s strapped to a chair in the middle of the room.” Glen’s voice came through Royce’s earpiece. “How do you want to proceed?”

Good question. Up until now, everything about this mission had been too easy, making this mission smell like week old fish. It had taken less than a minute to secure the perimeter. There were no guards surrounding the abandoned warehouse. No evidence of traps, no trip wires, everything appeared as if the kidnappers were amateurs. Even the weather seemed to be cooperating with no moon and a thick fog for cover. Royce knew he was a lucky bastard, but he wasn’t that lucky. “Is the package broken?”

“Can you see how many are guarding the child?” If they rushed the place, he could be risking the girl’s life. Royce pinched the bridge of his nose. The kid had already suffered enough. The assholes had severed the child’s ear as proof of life. Nabbed right out of her backyard, the nine-year-old had been through hell in the past eighteen hours. Bloody hell, she’s just a little bit older than Shelby.

“Negative. She appears to be alone, doesn’t mean there aren’t eyes and ears on her,” Glen replied.

“Affirmative. Dimitri, what do you have for us?” Royce looked up as Dimitri Petrov emerged from the shadows. The man was human, but a valuable member of the team and the best hacker he’d ever known. Surpassing his teachers, Viktor and Percy, in record time. Between the three of them, no computer was safe. The other reason the man was a valuable member, had to do with the small fact, every mission where Dimitri had been a part of had been a success with no casualties and no injuries. Hell, the Russian was their lucky charm.

“Jammers.” Dimitri held two small black boxes between his thumbs and forefingers. “The second you and Glen fade, I jam the place.” Dimitri shrugged and cocked his brown eyebrows. “Of course, the second they see snow, they could blow the place. I figure you have less than a second to snatch and run.” He shook his head as he set his toys down. “Then again, the girl could be sitting on a pressure plate. She moves and Kaboom.” Dimitri threw his hands in the air to emphasize his point. “Could be the reason why the kid’s not moving. I’ve run the numbers. Your odds of getting out alive? Not good, my friend.”

And the only reason Royce hated the man, his numbers never lied. “Alright. Question. Can your jammers prevent them from detonating remotely?”

“Maybe. If everything’s on the same frequency, and they didn’t use jam resistant equipment. If they did, then no. We’re not dealing with your average kidnappers.”

“Shite. All right, everyone come in, you too, Glen.” Royce watched as his team appeared. They gathered around the SUV. Nothing like having one’s back against the wall to make a man realize his greatest strengths were the people surrounding him. “As much as I want to believe we’re dealing with amateurs, my gut’s telling me this is a fecking trap, and the kid’s expendable. They may not realize she’s Dhampir. Okay, options? Anybody?”

Gravel crunched under Vaughn’s feet as he shifted his weight. “I drop in through the roof.” He pointed to the glass skylight. “Grab the kid and fly out. I never touch the ground.” For a behemoth, Vaughn could deftly swoop in and grab the kid. His solution made sense, but. . .

“If the kid’s wired. You and she are blown to hell. Then your mate kills me. That’s not an option.”

“Then what the hell am I here for?”

“Your charming personality and good looks.” Ever since Royce failed in protecting Peter and his mate, the slightest thing riled him. Royce would be damned if he’d lose another friend or family member. He met his brother’s pale green eyes. “Vaughn, you have Rosie and your kids to think about. I’m not putting you at risk. You’re here because, well, I figured the kid would need a parent figure. And shite, if Tee were with us, then you and he could play rock, paper, scissors for the honor, but he isn’t. Right, so, you’re our tyke wrangler.”

“What if I fade and reconnoiter,” Glen asked. “See if the kid’s wired? If not, I grab her and get out. Besides, I don’t have any kids or a mate.”

“That you know of, kids that is,” one of the others commented.

Royce met the faces of his team. He had a bad feeling about this. A really bad feeling. “Glen, Vaughn, Chase and Cade, you’re Alpha team. Dimitri, and Ryan, you are Bravo.”

“Duh,” Ryan muttered. “We know the only action we get is watching the rest of you play the hero.”

“Yeah, well you’re the ones who keep our asses safe.” Royce met the eyes of his teams. “Since no one has any other options, I want Alpha to cover the outer perimeter. Scott, you’re in charge of Bravo. Keep our resident tech geeks safe. I’m going in.”

“You can’t,” Glen argued. “Something happens to you, we all pay. I can go. I know how to disarm a bomb.”

“I know you do. I taught you. But, my lead. My risk.” Royce had shared blood with Glen enough to know what the man thought. They were more than cousins, they were brothers. Royce glanced around. These men were his brothers. He knew what each one thought. Their voices were a constant hum in the back of his mind. These men were his clan, his family, and he wasn’t risking any of them. “As I was saying, I want two groups, just in case they’re waiting to ambush us. Everyone else, you know your responsibilities. Vaughn, radio Percy, have him and Quaid standing by.” He faded before anyone could argue.

Shifting his body so he became nothing more than a ghost, Royce pressed against the wall of the building. In this form, he could see, hear, and pass through anything, his only drawback, was the lack of smell. Moving through concrete felt like moving through mud, or better yet, swimming against the current. As he emerged from the wall inside the building, it hit him. How in the hell would he get the kid out? Royce ghosted to the door. A quick exam didn’t show any wires. Maybe they were dealing with idiots and he could simply walk out the door. He could only hope. He floated toward the small girl.

The child’s chin rested against her chest and her light blond hair hung in front of her eyes. Blood caked the left side of her face where they’d severed her ear. The bastards hadn’t even attempted to bandage the girl’s wound.

Shite! They’ve pulled a bait and switch! This wasn’t Mina St. Clair. This kid was human. Bloody hell! Well, it didn’t matter. The poor kid still needed to be rescued and her injury tended. Maybe with proper medical care and plastic surgery, her ear could be replaced. The child’s emotional scars would be the hardest to heal.

Royce floated around the girl. Duct tape covered the child’s mouth and her hands and feet were secured with zip ties. She didn’t seem to be wired, no vest, or anything visible that set off alarms. Lying on his back, Royce peered under the metal chair the girl sat on. Again, nothing out of the ordinary. Royce stood behind the child and materialized. He didn’t want to frighten the blazes out of the kid by appearing out of nowhere in front of her. Had she been the child they’d searched for, he wouldn’t have hesitated. But this kid . . . He drew in a deep breath. The inside of the warehouse reeked of petroleum. Not good.

“Honey.” Royce placed his hand on the child’s shoulder. He wished he knew the girl’s name. “Sweetheart.” Royce gently shook the child. Her head jerked up and her tear stained face met him. Her eyes opened wide and she rapidly sucked air in through her nose. Royce heard the pounding cadence of her heart. The pungent smell of fear permeated the air. “Honey, you’re safe. I’m going to take you to your mum.” The girl’s chest rapidly rose and fell with her fear. “I’m going to pull this tape from your mouth. Okay?”

Tears slid from her eyes as she gave a jerking nod.

Gingerly, Royce removed the tape from the child’s mouth to prevent injury. The girl seemed to calm a bit. She licked her tiny red swollen lips. Royce stepped behind her then shifted his nails into claws. Once he cut the plastic zip ties binding the child’s hands and ankles, Royce lifted her in his arms and hurried to the door. One last quick scan of the door confirmed Royce’s first inspection the door was safe to open.

The instant he pulled on the door, he heard it and knew he’d mucked up. A faint click. The flash, followed by the blistering pain. The blast propelled Royce through the door. He had just enough time to wrap his body around the child, protecting her as much as possible from the explosion. Screams and agonizing pain filled Royce’s mind. His men, his brother, his family were caught in a secondary explosion. Underground explosions rocked the van Dimitri, Scott, and Ryan were in, monitoring the rescue.

Royce had failed them.

A soft whimper brought Royce’s attention back to the child in his arms. He rolled from her. Searing pain radiated in his back. The child sat, drawing her legs up to her and wrapped her arms around her shins. Royce watched her until darkness overcame him and he surrendered to the welcoming black abyss.

Crimson Moon is now available for pre-order on Amazon.com!! The release date is October 5, 2016! I’m so excited!!! Grab your copy today! 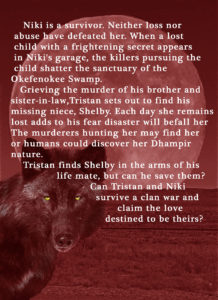