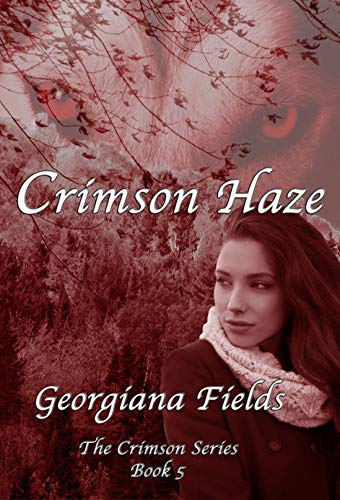 Quaid is fighting quite the battle within himself. His losses have been great, and he is struggling to get back to normal. Normal for Quaid is far from the normal the rest of us experience. Quaid’s normal involves instinctively knowing who his mate is, and possessing his own wolf form. Right now, Quaid has lost both. Simone, his destined mate, is recovering from a life fraught with trauma, and Quaid is trying to find himself again among all the madness. Will his world ever be righted? Will Simone feel whole again?

Crimson Haze is the fifth book in Georgiana Fields’s Crimson series and focuses on Quaid, his inner demons, and the fight he faces to regain his true form. Following a traumatic amputation, he is unable to change into his wolf form and is plagued with visions of his former self along with a feeling of helplessness where Simone is concerned. Her tragic life up until this point is a source of sorrow for Quaid, but it also presents a dilemma. He doesn’t know how or if he can help her recover from the horrific sexual abuse she has suffered. Quaid, intent on making the world right for them both, sets out to change the course of their lives.

One of the many things that makes Fields’s writing unique and worthy of binging is the sense of family she weaves throughout her cast of characters. Her already unique Dhampir cast captures readers’ attention, but the tight-knit family is evident from cover to cover. From sibling spats to fierce protection and reverence for their elders, her characters offer a long list of relatable qualities for readers.

Throughout the Crimson series, I have been impressed with the way Fields links one book to the next. There is just enough backstory given in each new installment to start readers off on the right foot, and then the new plot is off and running. As with the other books, Fields wastes no time in bringing the action. Readers will not be disappointed with Quaid’s introduction and the events surrounding his struggle to regain everything he has lost. Action is the name of the game with Fields.

Crimson Haze deals with the sensitive issue of sexual abuse in a tasteful way and offers hope to readers. It is strange to look at a vampire fantasy as having a therapeutic effect, but I believe Fields’s plot can provide readers a place of comfort and safety as they lose themselves in Quaid and Simone’s story.