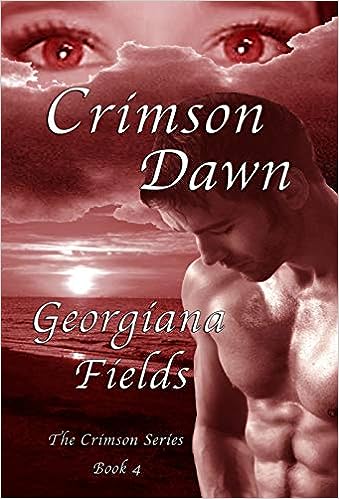 Jenny isn’t like the others. She’s special, but she would never admit it. As a healer, she is able to take away the pain of her patients in the most unique way. When Royce suffers an attack and escapes with the most severe burns she has ever witnessed, it’s left to Jenny to again make him whole. The same attack that wounded Royce took her friends’ lives and has left deep emotional scars on all of them. As Jenny goes about the job of healing Royce, she must continue to live with a secret she refuses to share with anyone--refuses out of fear for her very life.

Crimson Dawn, by Georgiana Fields, is the fourth book in the Crimson series. As with its predecessors, Crimson Dawn begins with a bang and the action never ceases from cover to cover. Fields opens each of her books with the most impressive and captivating events, grabbing readers’ attention and drawing them into the characters’ dilemmas from the first paragraph. The introduction of the race called the Dhampir in book one only continues to grow more involved and more mesmerizing with each passing chapter.

Jenny is the true standout in Book Four. Her self-proclaimed defects only serve to make her more of a heroine to readers. I have always had a fascination with characters who were able to read minds and heal. Jenny is a prime example of the misunderstood character who breathes life, quite literally, into an already gripping plot. Somehow, Fields has managed to shape a character who is the perceived underdog but at the same time revered by her peers. Jenny is in a truly unique position as a guilt-ridden empath and healer.

There is a seamless connection between all of Fields’ books in the Crimson series. While I tend to be one of those readers who likes to follow a series through to its final installment, I do prefer a series where each book is strong enough to stand alone. Fields has more than accomplished that in her series. Readers could pick up any book in the Crimson series and be up to date within a chapter or two. References to the plots covered in previous books are thorough enough to be effective without interfering with the current book’s story line.

I feel that I need to say this for those who might be on the fence about Crimson Dawn. The cover, while artfully done, seems a bit misleading. I got the impression that the book would lean toward more romance, but it is its own brand of vampire fantasy. While it contains definite romantic elements, it is much more for fans of the vampire genre.

Excited for Book 5, I highly recommend any of Fields’ Crimson books to readers wanting to invest time in an engaging cast of characters with something brand new to offer the vampire fantasy genre.